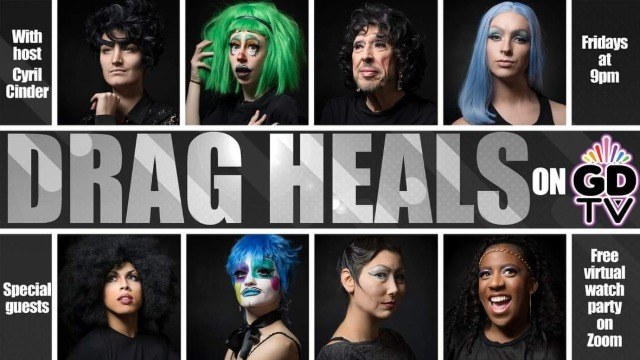 The highly anticipated season two of the hit documentary series DRAG HEALS is set to make its premiere this October 2nd! DRAG HEALS is a hybrid stage workshop and documentary TV series that follows eight drag artists over an intensive ten day workshop to build their own show. In each workshop, a guest coach joins stage director Tracey Erin Smith in exploring soul-deep story sharing techniques as well as the unique talents and skills required from a drag performer. Join one of the stars of this unique series, Cyril Cinder, each week to watch the episode when it drops on OutTV Go and catch his reactions LIVE! Also featuring dynamic drag performances, behind the scene details, and more than a few surprises!

Hosted by Cyril Cinder
With special guests (including other Drag Heals stars!)
Fridays at 9pm (EST) on Glad Day TV!
Broadcasting live from the traditional territory of the Huron-Wendat, Anishnabeg, Chippewa, Haudenosaunee, Seneca and Petun First Nations, and the Mississaugas of the Credit River, the GDTV Drag Heals Watch Party gives everyone the opportunity to see this emotional and deeply personal exploration into the incredible diversity of drag artistry.

Free to tune in, tipping encouraged.