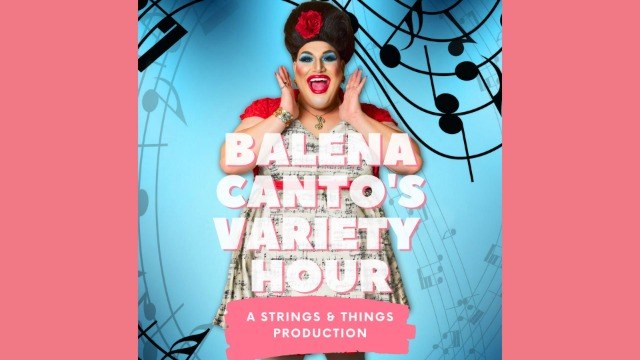 This month, I've decided to simplify things a bit...That means you are stuck with just me (hope you don't mind)! It's going to be a low-key and relaxing time. Some singing (spring & nature themed perhaps), chit-chatting (current events and performances happening in the opera world), getting to know one another better (maybe some more fashion), and possibly a few fun surprises (I'll give you a hint - Nintendo)! So tune in on Friday, April 9th at 7:30 pm EST and unwind with your favorite singing siren!

************************
Balena Canto's Variety Hour is just that, a variety show with endless possibilities! Join drag queen and opera singer, Balena Canto as she explores the worlds of drag, opera, classical music, musical theater and how they all intersect! You'll experience everything from performances, comedic sketches, games, interviews, discussions, special guests, and much much more!

Who is Balena Canto:

Balena Canto is a song-wielding siren with a voice snatched for the gods. Born on the southern coast of Italia, Balena sang out to sea conjuring a passing humpback whale who took her to a distant and mysterious land called, Philadelphia. Balena's favorite thing about her home is a local delicacy called, "water ice" (helps soothe the singer's throat). Balena’s mission in life is to bring joy and laughter to her audiences through song. In a short time, Balena has already made a name for herself performing in many of Philadelphia's leading shows and competitions. Also, she frequently hosts Drag Queen Story Times at many of the area's libraries teaching children about diversity, self-love, creativity and acceptance.

****The show will be streamed on the Strings & Things channel with a backup stream on Balena Canto's YouTube page:
www.facebook.com/stringsandthings2020
www.youtube.com/channel/UCGjEcCGwK-36YZdh5jaz5DQ