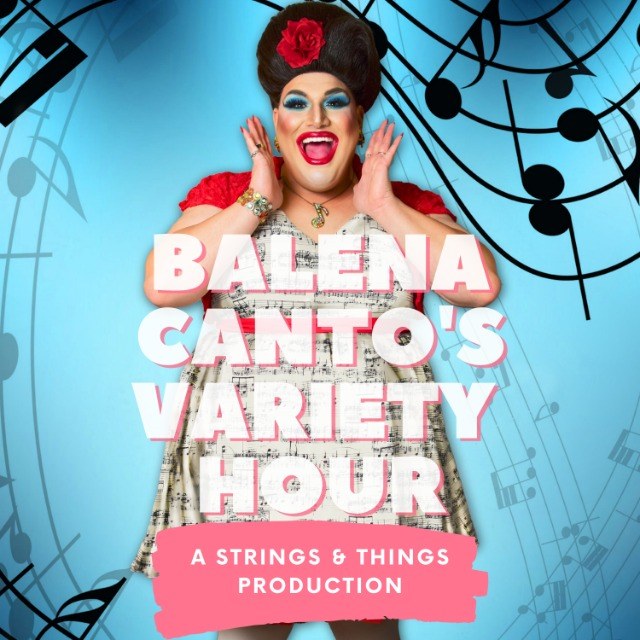 This months episode is all about FASHION! I'll be sharing my fashion inspirations both in the realms of opera and drag, discussing my favorite designers who focus on creating garments for ALL BODIES, and giving you a closet tour of my drag!

To enhance this months theme, all performances will be from the French classical/operatic repertoire! After all, France (and more specifically, Paris) is the fashion capitol of the world!

Our very special guest for this episode is Rachel Sigman, soprano and host of "Fermata Fashion" on the Strings & Things network!
************************
Balena Canto's Variety Hour is just that, a variety show with endless possibilities! Join drag queen and opera singer, Balena Canto as she explores the worlds of drag, opera, classical music, musical theater and how they all intersect! You'll experience everything from performances, comedic sketches, games, interviews, discussions, special guests, and much much more!

Who is Balena Canto:

Balena Canto is a song-wielding siren with a voice snatched for the gods. Born on the southern coast of Italia, Balena sang out to sea conjuring a passing humpback whale who took her to a distant and mysterious land called, Philadelphia. Balena's favorite thing about her home is a local delicacy called, "water ice" (helps soothe the singer's throat). Balena’s mission in life is to bring joy and laughter to her audiences through song. In a short time, Balena has already made a name for herself performing in many of Philadelphia's leading shows and competitions. Also, she frequently hosts Drag Queen Story Times at many of the area's libraries teaching children about diversity, self-love, creativity and acceptance.
**************************
Balena Canto was created by Philadelphia based opera singer, Matthew Maisano. He has appeared in both leading roles and as a chorister throughout the greater Philadelphia area with companies and ensembles like Opera Philadelphia, Opera on Tap: Philadelphia, Opera Tutti of West Chester, Wilmington Concert Opera, Children's Opera Box, Vox Ama Deus, Russian Opera Workshop among others. He's performed regionally with Pittsburgh Festival Opera, Natchez Festival of Music, Penn Square Music Festival, Miami Music Festival, Amherst Early Music Festival, and Greensboro Light Opera and Songs.
Matthew holds a Master of Music in Vocal Performance from The Cleveland Institute of Music (Cleveland, OH) and a Bachelor of Music in Vocal Performance from Temple University (Philadelphia. PA).

****The show will be streamed on the Strings & Things channel:
www.facebook.com/stringsandthings2020

There will be a backup stream on Balena Canto's YouTube Page:
www.youtube.com/channel/UCGjEcCGwK-36YZdh5jaz5DQ