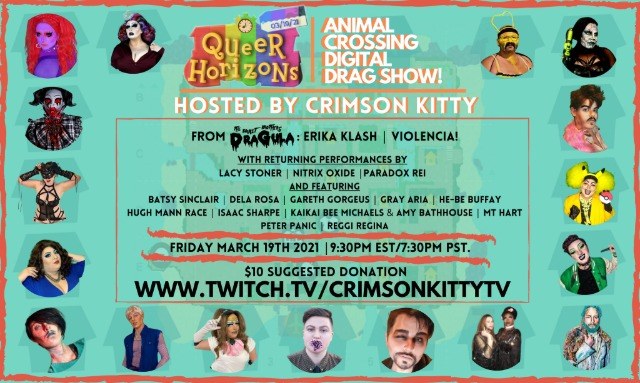 Animal Crossing: New Horizons came out on March 20th, 2020, and we only know this because it was a marker or sorts for counting the days into Quarantine.
Well it's been one year later....and we are still here....might as well celebrate it!
On Friday March 19th, 2021, we head BACK to our islands that we most likely abandoned, step on those cockroaches and listen as our villagers give us guilt trips about why we haven't spoken to them in months.
Hosted by Crimson Kitty
With performances by
FROM DRAGULA
Erika Klash
Violencia!
With returning performances by
Paradox Rei
Nitrix Oxide
Lacy Stoner
and featuring
Batsy Sinclair
Dela Rosa
Gareth GorgeUs
Gray Aria
He-Be Buffay
Hugh Mann Race
Isaac Sharpe
KaiKai Bee Michaels & Amy Bathhouse
MT Hart
Peter Panic
Reggi Regina
ALL PERFORMANCES ARE CLOSED CAPTIONED FOR ACCESSIBILITY.