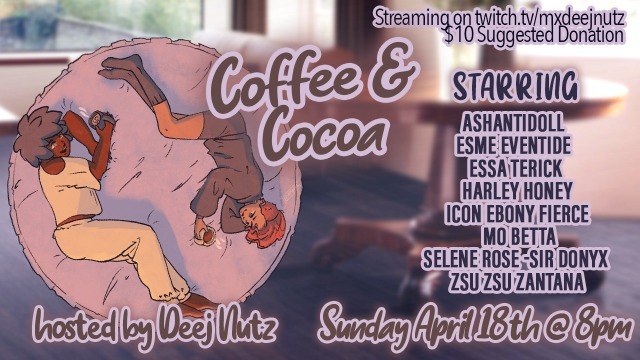 Deej Nutz and Esme Eventide are proud to present a brand new show: Coffee and Cocoa!
This variety show aims to celebrate Black and Brown voices and performers by showcasing numbers they have always wanted to do. For this first show, we are keeping things at home and featuring some Philly-based performers, asking them to put on performances of numbers they have always wanted to do, but may not have had the opportunity to execute in the past.

Featuring performances from:
Ashantidoll
Esme Eventide
Essa Terik
Harley Honey
Icon Ebony Fierce
Mo Betta
Selene Rose
Sir Donyx
Zsu Zsu Zantana
...and hosted by current reigning Philadelphia Drag King of the Year: Deej Nutz!
Special thanks to Parris Ryan for creating the poster and @artsbynar for the wonderful illustration!
The show will be streaming on Twitch.tv/mxdeejnutz and on Facebook, on April 18th, 8PM EDT
There is a $10 suggested donation which will go towards the cast's tip pool, so be sure to show them the love, however no one will be turned away for lack of funds ❤