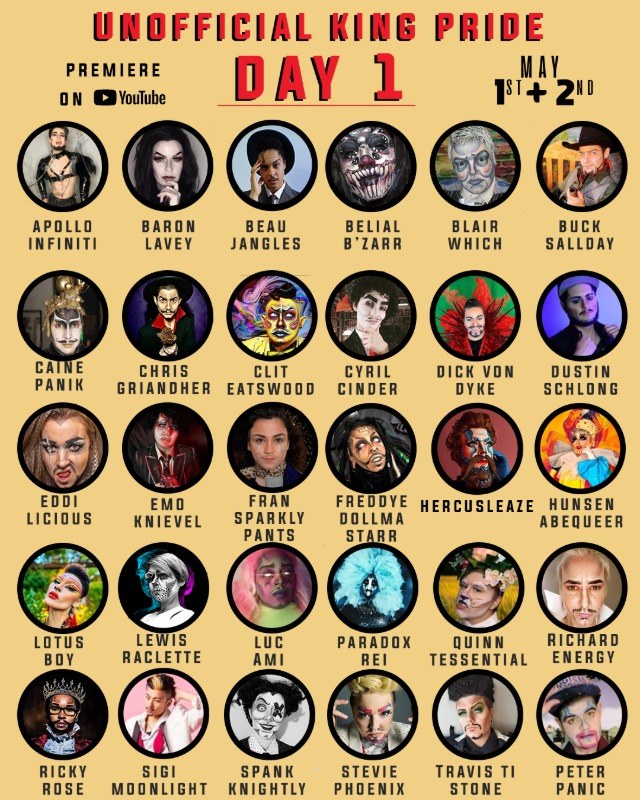 A free two-day event, viewers will have the chance to tip their favourite Kings during their performance. Macho Man Drag UK will also be raising money for the Terrence Higgins Trust, the UK’s leading HIV and sexual health charity, through charity auctions and other endeavours (Merchandise is available at www.redbubble.com/people/machomandraguk). The Unofficial King Pride will be available to view at Macho Man Drag UK’s YouTube channel. The team at Macho Man Drag UK believes in inclusivity and accessibility, therefore the show will be fully subtitled.

Support your favourite Kings and discover new ones as we showcase the best the world has to offer! Featuring original material, lip-syncs and more you are going to find yourself rewatching the show again and again. In a time when Drag Kings are fighting to get a seat at the table, we should be celebrating them more than ever! If you’ve never been to a King show before now is the time!

Charlie Bagshaw, creator, producer, and host of Unofficial Drag Pride said “Drag Kings have not yet received the appreciation or cultural renown as our feminine counterparts in the media and Unofficial Drag King Pride was born out of a need to break that glass ceiling. Having already showcased over 60 masculine performances within the UK in our previous cabarets, the scope and rewatchability of digital events have widened our audiences, and it is imperative that we take a seat at the table of fabulous genderbending icons so our community is accurately represented. Drag Kings, macho men, boylesque, male impersonators, masc performance art, or whatever you want to label us, are just as fierce in Drag, and Unofficial King Pride is the free digital event proving that.”

Following on from the success of our first two shows, Fantasy Cox Ball and Return of the Kings, where Kings were featured from around the UK, Macho Man Drag UK are proud to be showcasing the talents of Drag Kings from around the world.